I took this from my facebook, where HTML is impossible, so capital letters are the only form of emphasis available. I might format this later.

It's absolutely amazing watching guys flood a discussion about rape to scream INNOCENT TILL PROVEN GUILTY while falsely accusing all women of lying, but to really be gobsmacked, you have to observe the smug arrogance of men who proclaim that they don't need to READ BOOKS ABOUT RAPE.

And then they demand evidence from women. Which they ignore or then just dismiss out of hand. This is often called JAQing off----just asking questions.

Oh, and butthurt Trumpies are a new feature, too. Yeah....no. You voted for an asshole who BRAGGED about sexually assaulting women. You have no place in ANY discussion.

And another feature of these discussions is the way the guys ABSOLUTELY refuse to listen to women.

Is THAT why they're so obsessed with defending the concept of lying women? Why many of these guys jeer at "enthusiastic" consent? (You know they do.)Because the way they try and shout women down makes you wonder what they're actually defending. I suspect it's themselves. I suspect they're remembering all those instances where they tuned out a woman or where they just steam rolled over her. After all, who LISTENS to women, amirite? So if they say something stupid like "No", it's their own damned fault nobody listens, right? Right?

Which brings us to the last point. These guys scream about the poor sensitive falsely-accused Oscar winner while they brand women liars without the bat of a hypocritical eye, but what REALLY gets them incensed is any woman who behaves like a man----like me, for example, if you define "like a man" as "refusing to tolerate aroogance, lies, or condescension, states one's opinion without qualifications or equivocations,demands answers, and gets exasperated with bullshit." Men who do all these things are called assertive. This is what women get called. 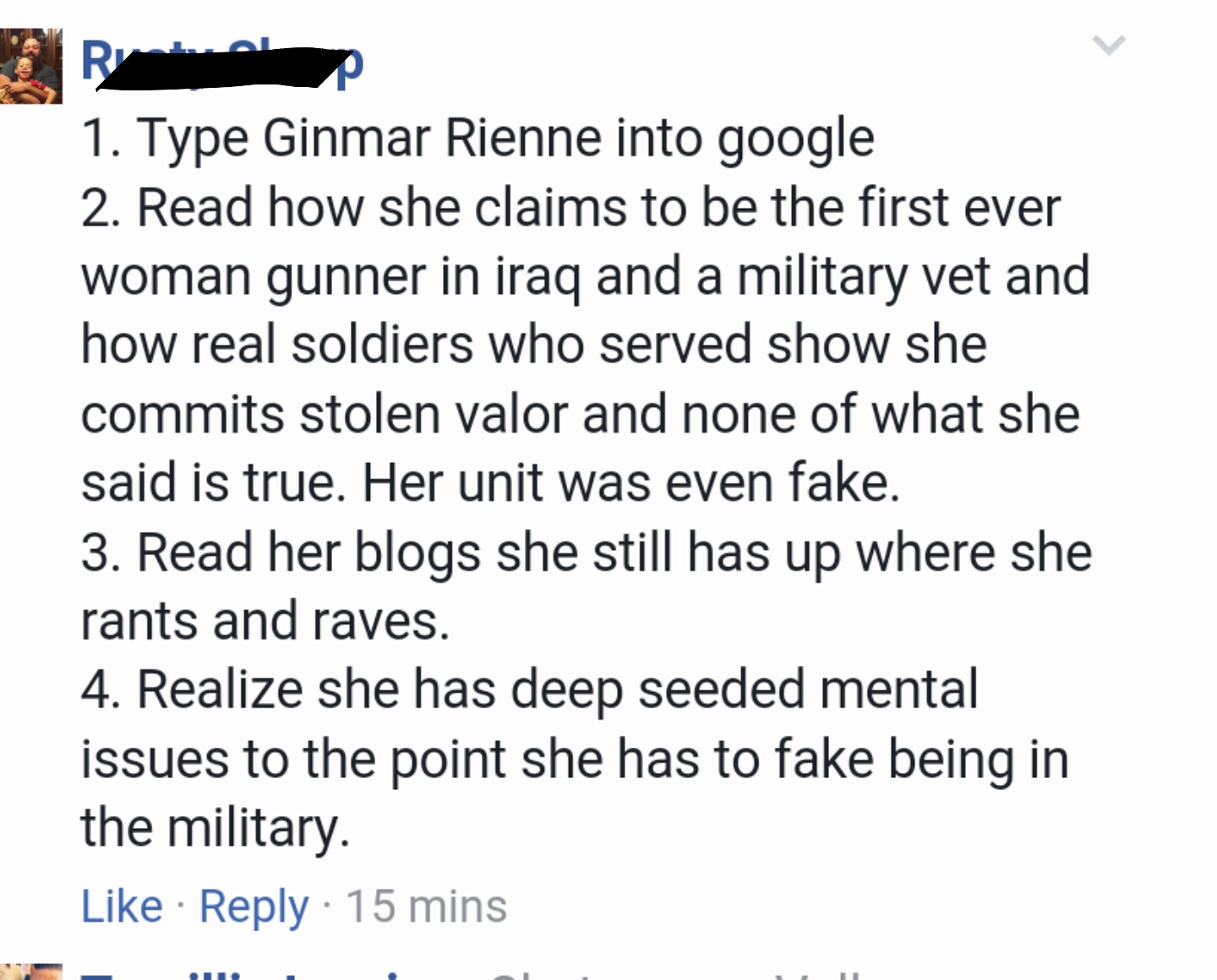 Notice the claims made here:
1. I never claimed to be first.
2. My unit most definitely did and STILL exists now.
3. Somebody says? Oh, wow, I'm totally convinced.
4. More anonymous sources, saying....what??


They won't listen to me so fuck 'em. They search for offense and find it. Unless you kiss their ass you're a man hater and they'll happily make excuses for how "feminazi" is totally fair but using your own judgment (by a woman) is persecution. CRUCIFICTION. A witch hunt. They NEVER use those terms for women. There is NO such thing as "Innocent till proven guilty" when you are a woman being accused by a man.

Yet women are to accept being bashed and condescended to by these guys. Sexism is unique among all hatreds because the defense is, "Yeah, so? She IS a bitch." Your choices are bitch or submission.

They expect you to take them by the hand and educate them while they either ignore it or ooh and aaah over them. Anything less than adoration is abuse by default. You only have two speeds where they're concerned.

And their excuse for not reading books? "It's about the rule of law and the presumption of innocence." Yeah, that's nice. Funny how it removes all sexism---theirs----from debate. And yet they ALWAYS falsely accuse women.

Oh, and ladies? NOTHING exists unless this guy sees it or experiences it. Nothing. Just stop. And YOUR experiences are probably lies but his are tremendously witty, interesting, LONG, and RELEVANT.

The final thing these guys do is magnification. Okay, FINE. Go ahead, make your jokes. But why are rape apologists so whiny? Any resistance or disagreement by women is being a harpy or a feminazi or a man hater. It's crucifixtion. Persecution. A witch hunt.

The phrase "woman-hater", though, gets shrugged off, because what ELSE do you do with women? They are SO hatable after all.

And God help you if you're sarcastic or just fed up with the bullshit. You're asking for it. (Men never ask for it. They're ALWAYS innocent.)Then you are "crucifying" them. You are conducting "a witch hunt." Bitching about a legal decision about a guy is "declaring one's self judge, jury, and executioner." Yeah, well, if I could smite assholes via a key on my computer then why are they still here? These guys get so overwrought at disagreement from women that you can get a glimpse of how cushy their lives are compared to womens'. You also wonder how they greet the concept of "no" from women.

"Women who disagree" so incenses these guys that they start raging both about crucifixtion and oppression----their own. Geena Davis did research about how men freak out when there's more than one woman per five men in a movie, but is there any way to measure the milijoules of male fury at women who refuse to suck up, who refuse to play nice, who think their history and their opinions---especially if they actually ARE informed about the subject----are more important than the bloviating of guys who assert their right to NOT read? Unread guys think their opinions are more important than the informed, educated, opinions of women. And they are flat out enraged at the notion that those bitches think otherwise. Male rage at female opinions fueled gamergate and the MRAs who morphed into Trump's Nazi base. (They care only ABOUT white men. When brown men get accused of rape, these guys are eager to "protect" white women who they would scream at as liars were the accused white men.)

And THEN there's the women. There's always the Reichwing women who think that strong means being an attacker rather than victim, though without a bat of a contradictory eyelash, they might talk about how they were victimized. Remember "The Only Moral Abortion is MY Abortion", that essay about the same demographic of women who see themselves as the extra special, unique, pure, innocent, perfect exception to the rule that all OTHER women are stupid lying filthy slatternly whores? So THEIR abortion is totally necessary? Yeah, keep that in mind. Yeah, yeah, yeah, people keep saying "internalized misogyny" but the evil stepsisters of the Reich sure aren't shy about attacking other women. You know the "compliment" 'you're not like other girls'? These are the "girls" who think that that compliment is all the better because if they throw other women under the bus, the sleaze at the wheel won't get to run them over while struggling over THAT hump.

And then there's the girls who are either lucky or oblivious enough to have somehow avoided sexism their whole life. They get terribly upset at sarcasm so they invariably tut tut.....women. Not men. They will wade into the fray and start simpering at the sexist guys, all the while waving their finger at women who have actually been fighting this fight since before this little fetus was able to walk upright. It's one of the most passive aggressive things you can imagine. Sometimes they confide they've had an experience, too, and because they Learned and Healed and Grew, you should too. Thanks, fetus, but take that sparkly shiny fairy shit and turn it into a glittery suppository. People are REALLY afraid of women getting angry. Why? Because they know what they've done and they fear finally getting nailed? Because payback's a bitch? Because every bigot, every sexist, every racist, knows that their paranoid hatred of women, POC, and LGBTQ folks amounts to an inadvertant confession?

Like....BLM. (Hatred of BLM is SO reliable as an asshole indicator I'm reluctant to mention it.) Who in FUCK could have a problem with the idea that Black Lives Matter TOO? The "too" is implied but it's there. So much of this culture illustrates that to many people, black lives do NOT matter, and this movement is to reddress that imbalance.

And that is threatening when the whole message is, "Please don't kill us."

And the male response is, "Lol you bitches."

Well, after a few rounds (or decades) of that, women have reached the point where it's become, "Fuck you then. We TRIED asking nicely."

Last but not least are the BWATM people, the ones who attack you for not mentioning male victims. We're talking about female victims here.

Furthermore, the correct sentence is, "Men get raped." It's declarative. "Men get raped, too, yannow!" is a demand that the minority of victims get the majority of the attention. The people who do this display NO interest in discussing it in any other context but when women are fighting men to get them to stop shitting out the usual rape apology turds. They do not have discussions about this topic on its own. The two types of victims are treated so differently that they cannot be part of the same discussion.

You disagree? Look at Milo. For YEARS, he has been harassing and stalking and attacking women, and encouraging others with his, "Will no one rid me of this troublesome priest?" coy claims that he's not responsible. He's repeatedly attacked female rape victims.(And of course Trump is president because people either don't give a shit that the guy bragged about all manner of sexual assault or harassment, or they actually live vicariously through his behavior.)

But the minute Milo talked about boys he was dead in the water. Girls? Nobody gives a shit. To be sure, part of this is homophobia, but I'm sorry....a 48-yr-old guy and a 13-yr-old boy IS abusive. The end. I'm not going to sit here and kowtow to the sensibilities of those who demand women excuse themselves and apologize and qualify their every opinion. I've addressed this topic before. But in a week, Milo was over. Trump is president. And when 13-yr-old girls DO accuse men or boys of rape.....they get called liars. Boys get called some fucked up shit, but "liar" is not the go to.

And by the way, what IS with these plantation owner type fantasies? Certain guys always seem to think---and some actually whine out loud---- that all they want is to be asked *nicely* and they'll distribute some rights. But those aren't rights if someone else holds them and decides who gets them.

These rape discussions have been going on for decades at this point. Women aren't giving up. Rapist apologists think they can just be assholes, but fuck them.

From now on, I just conclude that these guys defending sexual assaulters and harassers and rapists are rapists themselves or want to keep theiroptions open. They only have their own words to blame.
Collapse