Fuck this shit. How many fucking tries does it take to post a simple fucking photo?

It's all the more frustrating because this is the photo that can bring world peace. Look at this kitty. Look at how cute she is. I should ship her around on a Cute Mission, if only I can figure out a way to make her trill and head butt and lay her head on other people's shoulders.  My cat sitter-----a wonderfully lovely person who is great with cats and just about everything----has never seen her, but this kitty usually uses me when she does obnoxiously cute things like the nuzzle and floop in the photo. 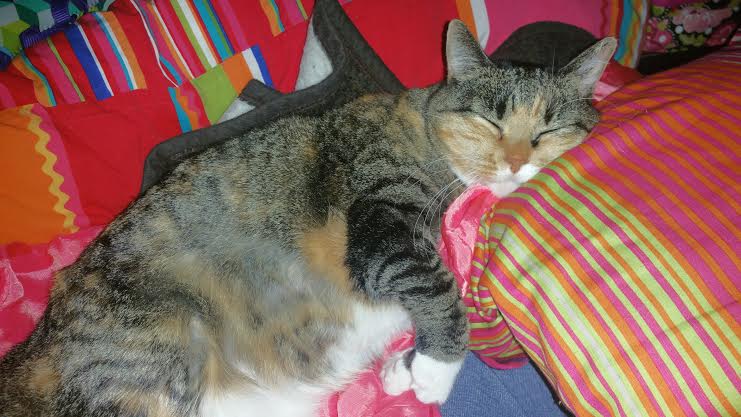 So there's a bunch of white dudes who have taken over a bird sanctuary on behalf of some other white dudes who don't want them there, either. These other dudes set a forest fire to hide evidence of poaching.  The judge sentenced them to less than the mandatory minimum,  and an appeals court re-instated the mandatory minimum. The Bundy assholes are whining about this because in their opinion, being white means  you get everything for free. No, seriously, that it's it. They're the son of Cliven Bundy, who grazed his cattle for years on federal land, then decided not to pay for whatever reasons angry old white fucks hit on these days.

Now his sons are saying they want "their" land "returned to them."

Except it never was their land. They never owned it. They never bought it, paid for it, nothing. This is on top of the usual galling spectacle of white assholes whining that something they stole was taken from them. Like, do shoplifters try this? "Hey, I got away with it, ergo it's okay."

This is beyond gobsmacking. This is so typical white male privilege I can't even. Seriously, do you need a better example? Is there a better example? I mean, aside from Captain Combover, another Human Cheeto who thinks the orange look with pale eye holes is attractive. Trump says he respects women, then beams and looks around, as if he expects his word---in the face of all his bitter insults tossed at women who didn't blow him as a substitute for shaking hands----to be good enough to serve as proof, in spite of all his incredible attacks on various women.

If  you want to see how privilege works,  just compare and contrast the behavior of the Ferguson protesters versus these guys, who are armed and still alive. Not just that, but they are demanding to be given stuff they never owned in the first place, not to mention that they came unprepared and are demanding "snacks." At least one of these guys has promised to kill or be killed. Can you imagine how soon they'd have been killed had they been black or Muslim?

There really is nothing else to say.  They need to be arrested and locked up.
Collapse