So I managed to hurt a hitherto-(mostly)unharmed body part (my knee) and now I can barely walk. But that's only part of the story.

I wasn't even doing anything, I think, when I hurt my knee. Well, except for running around the house. I just woke up with it hurting.

I was hoping I'd be able to talk to a doctor at the VA on Friday, when I had an appointment, but I waited and waited for my driver to get here and by quarter to, nobody had showed. I finally called the main number. The driver had had a family emergency and of course nobody had called me. Who did she get angry at? Me. I always wondered if that suburban hostility ever dissipated. When she first started driving me---and I made clear that planning and communicating before me getting in a vehicle was NOT negotiable---she also got pissed off at me after I put my foot down. "You ALWAYS do this," she sneered. "You always start to get better, then somethung happens and you stop."

It's amazing how they act like giving you treatment (for injuries they exacerbated with their neglect) can be abruptly be stopped without affect. That phone call that never came Friday, for example. I changed my number years ago, but VA staffers routinely blame you for their errors. In fact, when they called me to bitch....strangely enough, they didn't hsve a problem with tge phone.

The injury in my knee is such that I csn neither straighten nor bend it and it keeps buckling. The pain is at the outside of the knee and to the back. I've been icing and heating by turns, but those litter boxes don't scopp themselves. I just started lifting weights and this is really fucking irritating.

So I tried to get the VA to athirize sn ER visit to a non-VA ER, but of course, they wouldn't. And at the VA ER, they'll diagnose the same kind of arthritis you get where, one day you're fine, the next day---after your dipshit driver nearly tossed you from the gun turret trying to swerve away from an IED---you suddenly are in so much pain from neck to knee that you can't even turn your head. Funny how all women soldiers get that sudden onset arthritis.

I did finally finagle a doctor's appointment with not my regular doctor (she and I conduct our visits in rusty French, but it's fun) so maybe my knee will mysteriously be all better for Xmas. That's what always seems to happen.

I really hate the fucking VA. 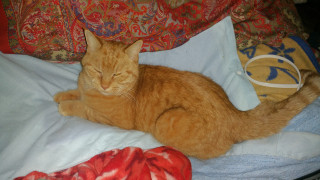