Every now and then it's plain as day, when people don't try and conceal it. It's pretty much the whole GOP party platform, where like a lot of scumbags, they think that they have plausible deniability unless the Party Chairmen declares "The War on Women begins here!"

To what am I referring? 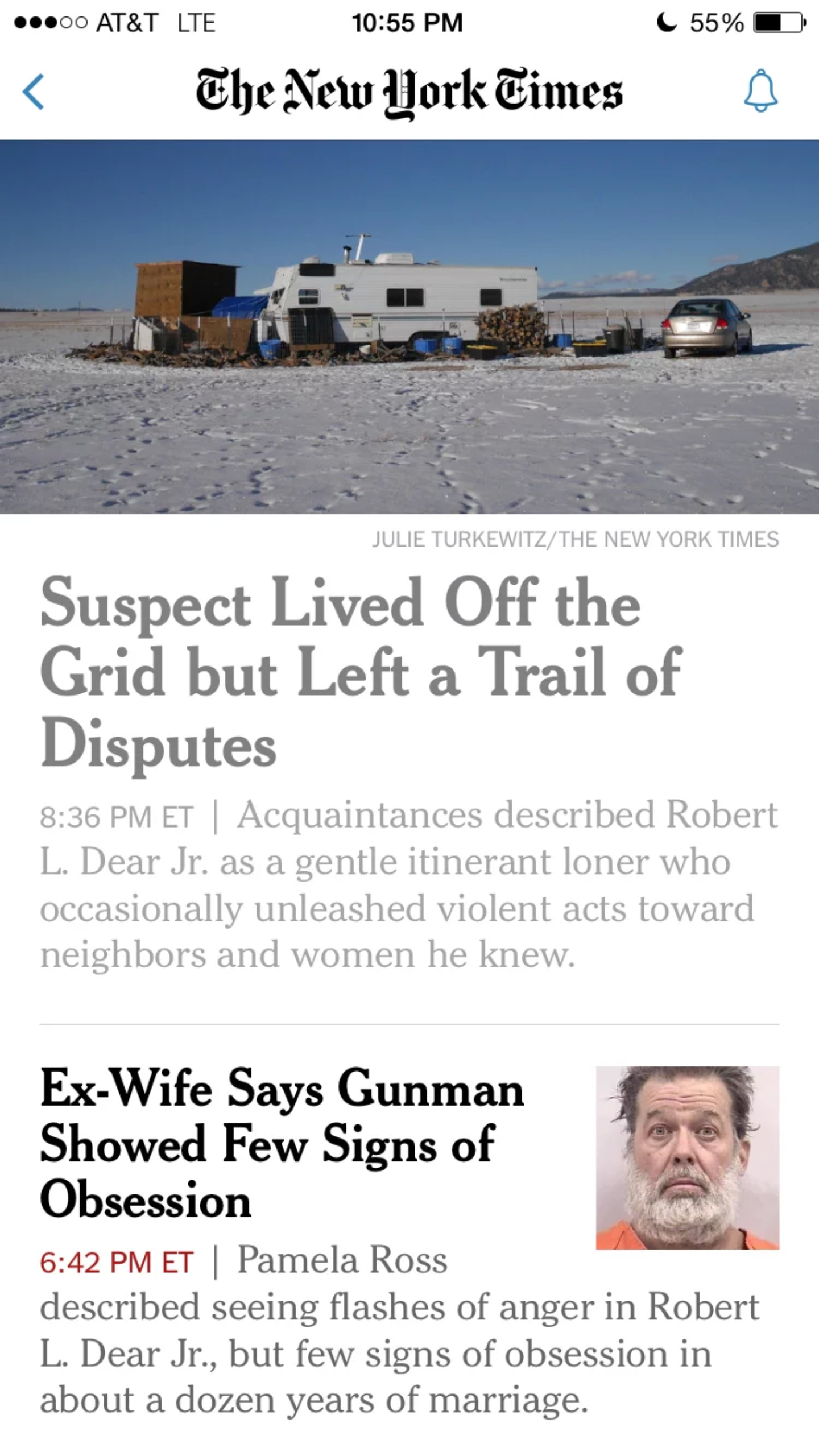 A "gentle" loner who occasionally unleashed violence against women.

Funny thing is, you don't get freebies when you attack actual human beings. This is how you identify actual allies: they don't make excuses for the guys who have just one or two attempted murders, or----like some ex hippies I know---they don't whine that the poor dear was drug-addled and really, he's a nice guy most of the time. You commit one rape, you're a rapist. You commit one murder, you're a murderer. Unless your victim is a woman.

There's this attitude that guys deserve a freebie or two if the victims are women, because bitches lie, right? It's that hysteria thing; you can't trust 'em. They exaggerate. They want attention. They're hypochondriacs. They're emotional. They're hormonal. They lie. Isn't it funny how when women and minorities want attention they use the most negative stereotypical behavior you can imagine, instead of excelling at something? Oh, wait, that's because they can't excel at anything. Women and minorities aren't good at anything the way men are, of course, because men work hard and....Yeah, sorry, this is why you should never go to Reddit, home of pedophilia apologia par excellence, and justifications for why white guys are the best of everything evar, and deserve all the cookies.

But anyway, there's this thing you stumble over when you study what men do to women. With other groups of oppressed people, slurs and insults are so recognized as hate speech these days that bigots resort to dogwhistles (when they're not whining about "political correctness", that is). Of course, with the GOP candidates these days, the dogwhistles are getting very very loud and actually frightening the dogs.

But with women, when you criticize the use of sexist slurs, the reaction is usually a shrug and, "But she IS a bitch." There's pushback when other victims are blamed....but when women are blamed, often times men who have themselves been victimized join in in blaming women for asking for it. The use of hate speech is so recognized these days that the bigots have to resort to dogwhistles these days, though with the Republican Party's candidates, the dogwhistles have gotten so loud that the the dogs are actually cowering in their houses. In fact, to improve deniability, racist hate speech is often visual----like when white-run TV networks use mugshots of black men to hint that they asked for it. (Mugshots are taken at arrest, not at conviction, and somehow they reflect on the subject and not on the potentially-racist white cops who dream up arrests for black guys.)

The view that women are just as likely to be victimizer as victim---in fact, more victimizer, period-----is unique in its acceptance across all groups. Even other groups of oppressed people view women within their group---or in other groups---this way. The myth that women lie more than they tell the truth works for anybody who wants to oppress women---and this can include other oppressed people. Oppressing women is useful. Not just that, it gives everybody a villain around which everyone can unite. Somewhere back in pre-history, the first guy who got pissed off at some pre-historic woman refusing to do what she was told must have bragged far and wide to other guys about this nifty way he'd discovered he could shut the bitch up. "Woman," Freud said, "What does she want?" The idea, of course, was that all women were mysterious and manipulative so what point was there in asking them?

The stereotype that women scheme and lie in the background crosses all cultural lines. It cuts women off at the knees before they can make any headway, makes them villains in a way that denies them their humanity---and makes them separate from the human race in a way that men just don't experience. Mens' rights, you see, are always taken as human rights by other groups of men. Mens' rights----human rights---are carved in stone. Womens' rights are seen as shifty, suspicious things that seize rights that should belong to men, if you're not some kind of commie pinko Marxist fascist liberal. (Yes, I have had some asshole call me the latter three, all at once---and that was within the past few days.) We still write womens' rights down on paper, then hold a lit match to it when those rights get too inconvenient.

Deny women equal rights, but people always demand more responsibility for wrongs from them, too. Look at these Taliban-like dress codes in schools across the country, part "boys will be boys" and part "teen girls are sluts like Lolita." Ten bucks says the boys being protected from spaghetti strap camisoles are the same ones screaming on reddit about "hugboxes" when they're the ones demanding that women cover themselves up so their little brains won't be distracted. That's wanting the whole world to be a hugbox. It's like Jews demanding that everyone else stop eating bacon because they can't. Notice how Jewish people never actually do this, by the way, though a few arch-conservative extremely Orthodox sects demand that women be removed from everywhere so the men aren't.....tempted. Congratulations, American schools and boys, you are acting just like somebody with Sixth Century ideas about women.

You know they're full of shit when they don't come up with a simple solution: goggles. Blinders. Wear a fucking scarf, assholes. Not my problem.

So here's a guy who was violent but the New York Times still calls him gentle....though they've erased that part of the article now. People still remarked on the phrase, which is a hopeful sign, but the editors at the Times felt a man who was violent toward women could nontheless be described as gentle. It's kind of like how it only matters the way dudes treat men, whereas no one cares the way they treat women. No Human Involved is what some cops say. When it's women, the phrase and the concept is far more universal. You see it mentioned in justice: "But he has a bright future ahead of him!" Said about one rapist who wanted to become....a police officer. Try and unpack all that. What's one little rape compared to all the good this guy might do for actual human beings? Besides, the bitch probably asked for it.

When Strauss and Gelles were planning the first large interviews of domestic violence victims decades ago, they decided to erase all mention of sexual assaults in their tally of violence in the home. You know why? Because it was so universally men-vs.women that it "skewed" the results. They had already made up their minds that violence would be equal. If you want to count violent acts, you're going to have to come to the conclusion that men are far more violent to women than vice versa, a fact that makes Cool Girls and MRAs very uncomfortable. If you have a theory that matters more to you than the truth, you somehow conflate stabbing with a knife with self defense with a pillow, which is exactly what they did. Because women are evil and they must be equally evil to men, that's why.

No Human Involved. Robert Dear attacked women and womens' rights to the point of killing, but that doesn't make him a terrorist. Like so many anti-choice men, he was a failure at pretty much everything except dominating women and having an affect on them, so he decided to act on GOP lies about 'baby parts" and strike a blow to show he really was the hero in real life that men are raised to think they are, even if it's all in their heads. Guys expect to be the protagonist in life, as if it's all a big movie. Refusing to carry an unwanted pregnancy is rejecting a guy's non-existent right to treat women like a canvas on which to make their mark.

These guys don't give a shit about babies. It's all about not being the domineering macho men they felt was their right as men---and conservative men at that. Sexism is the last gasp for these losers: "Well, I might be a total failure in life and love and marriage and work but I can still dominate women and bend them to my will. Oh, wait...."

Dear reportedly ranted about "no more baby parts" when he was arrested. When will Republican lies catch up with Republicans instead of the rest of us?

And the next time somebody whines about this overwhelming liberal media we have, point them at this screenshot. The NY Times is supposedly the most liberal of the liberal, and nobody thought twice before describing a woman-beater as 'gentle.'

Jesus, I cannot stand anti-choicers. Stop me before I waste my fuckin' time on these lying shits again. It's all lies. They never cite actual research facilities, just made up entities designed to push their bullshit, such as "the Center for Medical Progress", which was the name of the group that falsified those videos that weren't extreme enough for Carly Fiorina. Protip: if the name of the group sounds incredibly progressive and liberal, double check that right out, because conservative assholes have a tendency to pull shit like that. Jesus.
Collapse